“I believe Art has the power to bring about social change. We have seen this occur repeatedly looking through Art History although it is often in hindsight that it is recognised and acknowledged. I would like Art to have greater respect for in our .”

Janine’s artworks have been privately collected in Victoria, South Australia and Queensland and Internationally in the USA and UK.

Janine has been a Finalist in some prestigious Art Prizes across

Australian and was the winner of the 2013 Latrobe Regional Gallery Dick Bishop Memorial Award.

In 1996  as mother of two small children Janine returned to tertiary study completing a Bachelor of Visual Arts with Monash University, majoring in Painting and Printmaking. She received a Patrons Award and 6 letters of commendation for excellence. 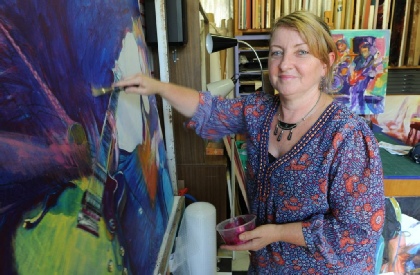