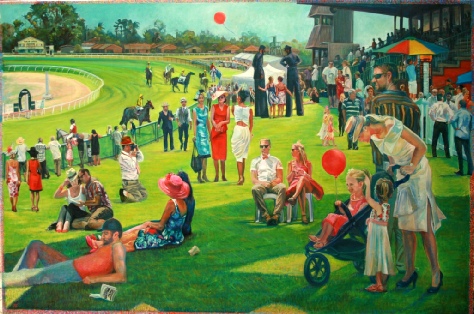 The composition is modelled on French Impressionist painter Georges Seurat’s A Sunday Afternoon on the Island of the Grand Jatte, 1884 and the title of ‘The Lost Balloon’ was later changed to ‘A Sunday Afternoon at Country Races’ to better acknowledge the connection. The reclining figure front left is directly out of Seurat’s painting with some modification to integrate him into his new setting. The proportions were very close to the Seurat painting and both images have a strong social community theme so it seemed a good fit to place the track where the river was, the grandstand where a group of trees stood and substituted  groups of people from photos generously provided by Gembrook artist Sue Jarvis taken on the Race day.

During the painting of The Lost Balloon I became ‘fascinated by the fascinators’ and hats and fashions in general at the race day and started some paintings of these. This kind of fashion is quite exclusive to the races, I can’t think of any other  public event where hats feature so creatively. 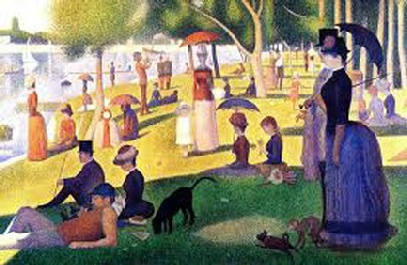 Georges Seurat’s A Sunday Afternoon on the Island of the Grand Jatte, 1884

This painting, originally called ‘The Lost Balloon’ is not only an historical depiction of the last Pakenham Cup Race day to be held in Pakenham township before the course was redeveloped out of town but is also symbolic of the changing nature of outer regional towns being swallowed up by the suburban sprawl. The Pakenham Racecourse in the heart of the town had facilitated the Pakenham Races for many years but was also considered a community hub by many locals as it was also the venue for the Pakenham Agricultural Show and where local school sports were held. So for some locals it was the lost balloon of many childhood memories.

An imaginary narrative of the young girl in the foreground watching as her balloon drifts away captures the sense of community and a picnic atmosphere. Suburban houses encroach on the perimeter of the track.

This project which was set in motion for SECAN (South Eastern Contemporary Artist Network Inc.) by Sue Jarvis to commemorate Pakenham’s final race day by inviting a group of local artists  to attend the day to produce artworks and document the historical event, the end of another era.