To commemorate the closing down and last race day for the Pakenham Cup held at the Pakenham Racecourse in February 2014 before its relocation to Tynong, a group of local artists attended the day to document this historical event. This project was initiated by Gembrook Artist Sue Jarvis for SECAN (South Eastern Contemporary Artist Network Inc.) and involved photographing the event so that SECAN members could then produce artworks for historical purposes. The Red Balloon painting by Janine Good is one of the results of this project.

Janine couldn’t attend the day but the extensive photographic documentation by Sue Jarvis and others enabled her to create a picture of how the day may have looked. Using more than 30 photographs and taking over 150 hours Janine pieced together her version of a typical country race day. It is based on the composition of French Impressionist painter Georges Seurat, Sunday Afternoon on the Island of La Grande Jatte, painted in 1884.

The race day photos share the same theme of people outdoors enjoying a warm sunny day present in the famous French painting. What struck Janine about the Pakenham race day was that all kinds of people were there enjoying the event – young and old from all different backgrounds, some dressed up, some casual – she wanted to convey this sense of Community in her painting.  The painting started with the foreground group on the right hand side, a woman with a pram and 2 young girls, dressed up for the day. A narrative emerged in the artist’s imagination that they could have balloons and one of the girls has lost her balloon. Little narratives like this occurred repeatedly as relationships developed between characters in the world of the painting. It not only documents the setting but captures the colour and atmosphere of the day. To pay homage to Seurat’s original painting the figure front left has been retained (although altered slightly) along with the pointillist border. 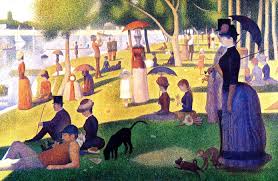 A Sunday Afternoon on the Island of La Grande Jatte, 1884