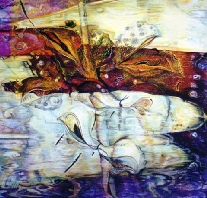 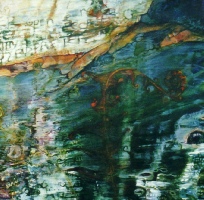 “S/He to whom Nature reveals her open secret

will feel an irresistible yearning for her most worthy interpreter - Art”

For as long as I can remember I have been drawn to the intricate beauty of nature.

Like most Aussie kids I grew up spending a lot of time in the outdoors where I was fascinated by objects such as seed pods, various types of rocks, feathers, shells, leaves and tiny creatures. Devoid of symmetry and perfection, bearing the scars of time, these objects are infinitely diverse in shape, size, structure and colour. Intrigued by their diversity, I imagined the history behind them – how they were formed, how they got there and how long ago?

My artwork reflects an exploration of patterns and rhythms that echo throughout the landscape, from vast panoramas to fragments of peeling bark that exist as a microcosm of the whole. Imagery is layered in consecutive paint applications to simulate various elements, for example washes of water, waxy layers of growth, scraped and splattered to simulate the effects of time - the final image evolving incidentally. These layers to me are analogous of the life process symbolising various layers of meaning from intricate detail to apparent obscurity.

Interpretations of landscape and the elements found within it are where abstraction began for me. The abstract interpretation allows for a more symbolic exploration of the spirit of the land. The Imaginary Landscape paintings, drawings and prints were the beginning, and were a natural progression from modifications of landscape that occurred following the Central Australia painting trip in the late 80s. Some experiments with Collage to work our composition were a natural progression.

Seedpods as a symbol of being a woman and reproduction became the next progression followed by surreal interpretations of bark from majestic River Red Gum Eucalyptus camaldulensis. Marks made on these ancient trees provided imagery with a sense of the history of this land. A key work from this series is called Irresistible Yearning taken from a quote by Johann Wolfgang von Goethe, 18th century German philosopher.

A pause in this work for about a decade followed due to a decision to explore narrative in figurative work but has recently been revisited through the exhibition called Pareidolia at Burrinja Gallery in June/July 2018. 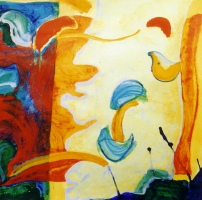 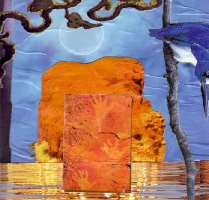