This artwork was designed by Drouin artist Janine Good as part of the Creative Recovery Project in Cardinia Shire undertaken by three artists between March 2020 and March 2022 for communities impacted by the March 2019 Bunyip State Forest Complex bushfires. The Project was partly funded by Victorian State Govt and coordinated by Cardinia Shire Council with assistance from the Creative Recovery Network. This design for Corten Steel Panels to be installed at Cannibal Creek Reserve was Janine’s contribution to the community, along with the designing and coordination of a Drystone construction in Tonimbuk and community workshops.

“While a landscape can be immediately recognised by its landmarks and broader features it is also defined by the lifeforms that are sustained within it.

The recovery project landscape adjoining Bunyip State Forest with its granite underlay and the Mount Cannibal / Cannibal Creek to Bunyip River waterways supports a rich diversity of species making it a unique microcosm, that its human residents acknowledge and have great affection for.

The difficulty was deciding which of the thousands of species of plants and animals should be included. I wanted to create imagery that brought you into the world of these species, from their perspective, so I have taken the view sometimes under water, sometimes in the grasses or ground level of tiny orchids and sometimes in the treetops. I have included a nocturnal reference and a sunrise, the dry season and the wet.

The Eastern Kulin Nation Seasonal Calendar referenced from Museums Victoria was a good starting point, it provided a glimpse into the diverse environments that exist and the constant change with the seasons.       We are indebted to the indigenous elders both past and present for the knowledge they have shared to help make this information available for future generations.

Where the Kulin Calendar was based mainly around food collection by our First Nations people, I have added some local stories into the imagery. I have shown the Helmeted Honeyeater because a population of the birds were released into Bunyip State Forest, an attempt at helping preserve the threatened species. I have included the Goanna and Wedge-tailed Eagle nest that existed on Mt Cannibal before the fires. I have included the Sooty Owl, another threatened species to educate about the need to preserve old growth trees for their valuable hollows. Some of the species are what I have observed during the project such as the Superb Lyrebird we heard and saw at Garfield North one memorable morning. Some are my favourites like the Yellow-tailed Black Cockatoo.

Each panel tells a story of the time of year shown by a circular sun symbol that grows larger as the seasons get hotter and shows some of the plants, fungi, animals and insects that live within and contribute to the uniqueness of this environment.” 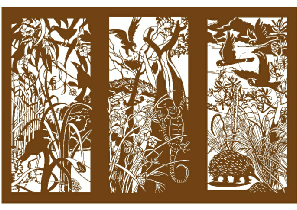